Because we wanted to make the most out of our weekend, I suggested that on the next day we travel to Aizu Wakamatsu. I am a big fan of samurai stories and this was one of my must visit places once I travelled to Japan. 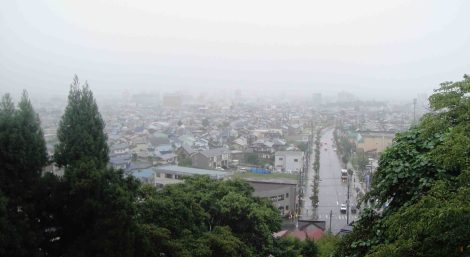 View of the city

The Aizu were a Samurai clan from the Aizu feudal domain that played a big part during the Boshin wars, the Japanse revolution of 1868-9.

One of the most famous stories is the story of a group of 19 really young soldiers, who during the battle of Toba Fushimi, got cut off from the rest of their unit and then seeing what they though was, their castle in flames believed the battle to be lost and decided to take their own lives.

It’s a very sad tale about the other side of the coin of the Japanese spirit.

Aizu Wakamatsu is in Fukushima prefecture and visiting in 2013, just two years after the 2011 Tohoku earthquake and Fukushima accident, was not an easy decision.

We still decided to take a chance and go to Aizu Wakamatsu because it was located as far from the power plant as Sendai and so, almost as risky.

However, to travel there by train from Sendai we would need to change trains in Koriyama station, which at that time had high levels of radiation. This was then out of the question and so we decided to take a direct bus from Sendai.

The bus went through the highway which was not as scenic as the railway but still it was interesting making stretching breaks at service stations along the way. 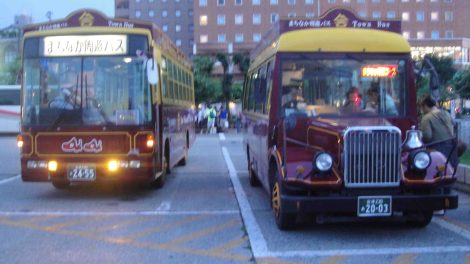 When we arrived, our first stop was the information office where we were given an extensive guide on all the restaurants and attractions. We also decided to purchase a one-day ticket for the loop bus that goes through the main touristic points.

Pictures from Iimoriyama and the samurai graves

We took the loop bus to our first stop, the resting place of the 20 young samurai who committed seppuku, Iimoriyama.

It was pouring down at that time so it was really difficult to manage camera, umbrella and avoiding people, but I feel the rain gave a more solemn feel to the place

Afterwards we had to walk to the samurai residence because the bus would never come, luckily the rain took pity on us and stoped. 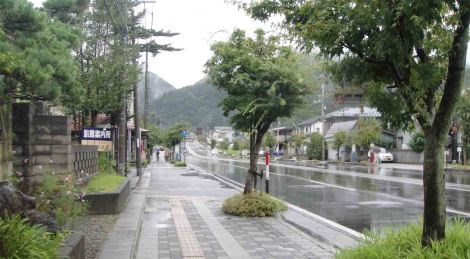 Street on the way to the Samurai residence. The city is surrounded by green hills

A traditional Japanese house is higher than the ground level, with rooms separated by sliding doors and floors covered with tatami mats. Rooms are connected by outside wooden small balconies without rails. Usually, one may find small gardens with little ponds or even a small traditional room for a tea ceremony. 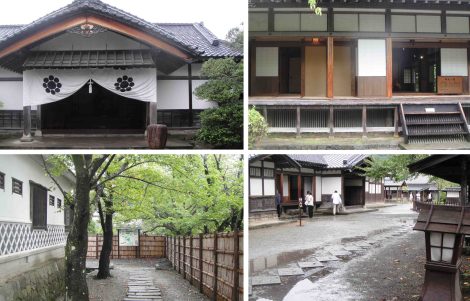 A few pictures from the samurai residence

For visiting this residence tourists were only allowed to walk outside the house and peep inside to see beautiful painted panels, tatami mats and human sized dolls re-enacting life scenes of a samurai family.

Well lunch time was approaching, signalled again by my hungry girl. We started to look for a place to eat. Since the loop bus still wouldn’t come, we kept walking – and walking and walking and walking. – Eventually when moodiness was already creeping up on the both of us we got to a covered area and there we found a ramen shop. 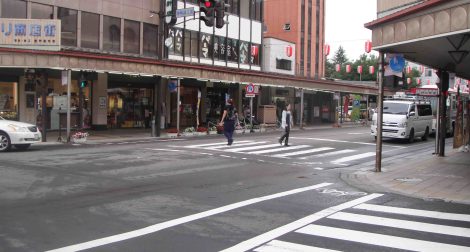 It was a traditional place, wooden sliding door, a couple of wooden tables and places to sit at the counter. We decided to take a chance and enter. It was a ramen shop ran by a couple, really kind people that made sure to chat with us. We learned that they spent sometime outside of Japan for a few years and ­­spoke perfect English with us.

Pictures from the ramen restaurant and the couple

This ramen was my first ramen in Japan. I don’t know whether it was just because we were really hungry but it was delicious. In case you don’t know, summed up, ramen is a noodle dish served with meat and some other vegetables and fish cakes, served with a wonderful bowl of stock made of fish stock and other Japanese seasonings.

It was finally time to see the castle, one of the reasons why Aizu Wakamatsu is so famous. Tsuruga jo built in 1384 was destroyed during the Boshin Wars and then reconstructed. Although not one of the most impressive castles in Japan, It’s beautiful and well worth the visit if you are traveling this region.

Around the castle there is a wonderful park perfect for ending the afternoon.

Tsuruga park and the waterway that surround the castle

To honour our tradition, we bought at some local omiyage shops a package of sweets. We decided to properly attack them on the bus when going home.

While we were cruising the shops, some old ladies were really surprised to see two short foreigners and tried to chat with us telling us “small and so cute”. They were really kind obaasan [granmas].

Anyway this time we chose chocolate mochi [ rice cakes ] they were really soft, delicious and gone pretty soon after we opened the package.

Cake packaging and our chocolate mochi

I don’t remember anything from the return bus trip, although, I have a vague recollection of being at the station with other people and having no idea whether we were at the right place. Since we were so exhausted, we probably fell asleep as soon as we got into the bus coming back to Sendai.

The next day was going to be working Monday.

In the map I marked the places where we went to. The ramen restaurant’s Kanji are 會愛茶屋 and on Google it still seems to be open. 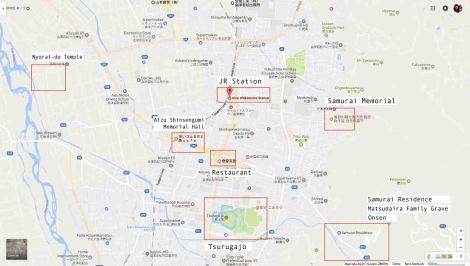 There are other attractions in the city;

To relax, there is an onsen and to get there you just have to take the loop bus and exit after the Samurai residence, at Higashiyama Onsen stop.

For more history, make sure to check the The Grave of the Matsudaira Family, The Aizu Shinsengumi Memorial Hall and the Nyorai-do Temple where Shinsengumi troops lead by Hajime Saito fought.

You will probably need a full weekend to do all those however! Safe travels!