In the center of Portugal lays a, used to be, small city called Leiria. With Celtic prehistory Leiria has always been known as a fertile farming and cultivating area. Later, it grew as a populous area, part of the Portuguese territory, and to protect it, a medieval castle was fortified.

Nowadays Leiria is mostly know by us, thanks to the former King D. Dinis who ordered the plantation of the beautiful Pine Forest in the region.

The castle’s terrible view from upclose

On a weekend in June me and a friend grabbed her grandparents and went on a family, dog included, day trip to Leiria from Lisbon.

The entrance of the castle is filled with lush greenery

Our destination was Leiria’s castle, which we explored the whole afternoon up and down the hill.

Dating from the 11th century, the castle kept gaining new architectural features throughout the centuries, undergoing restauration some years ago and growing from a medieval castle into a residential fortification. 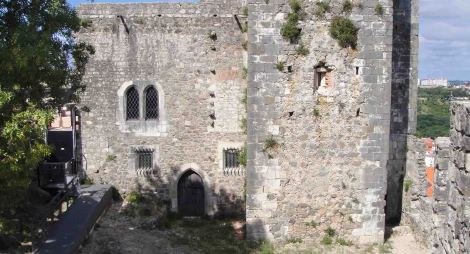 Structures and adornments of the castle

It has great strategic relevance since it’s a castle on the way to reaching Lisboa coming from Coimbra to the North.

I found it a beautiful castle, well maintained, and easy to explore even considering how old it really is.

View of the city

I would go for the bus, the bus station is closer to the old town, its cheaper and daytime intercity busses can be quite comfortable and safe in Portugal.

In Leiria you can visit the castle which is open from Monday to Sunday, between 10 am and 6 pm. With an adult ticket to get in costing 2€

In the city centre you have the two main squares Rodrigues Lobo and Sant’Ana where you can see many old historical buildings with small coffee shops.

Nearby you can visit the main city church founded in the 16th century and the city park created in the 19th century. The local library in the old town is also a reference, dating from 1955.

The local river is the Lis river, stretching through 40 km and reaching the ocean in Vieira beach, is a respected for the fertility it brings to the area for agriculture and farming. In the city you can stroll along the river, enjoying the sun and practicing sports.

Leiria is a great city to visit on a day trip from Lisbon. I think if you manage to organize your schedule, you can really enjoy a nice day filled with history.

What would I do differently

This was a really important and beautiful trip I did it with a great friend of mine and her family and I think this will always be a really beautiful memory for us.

I completely forgot that I should have made a proper post about Lisbon upon arriving. So I will try to make a post next week about how I started to view my city after being away.

Hope everyone is doing well and that you liked this first post traveling in Portugal. Tell me what kind of details you would like to know and what information I have missed.

See you next week!

Leave a Reply to Sara (the friend) Cancel reply